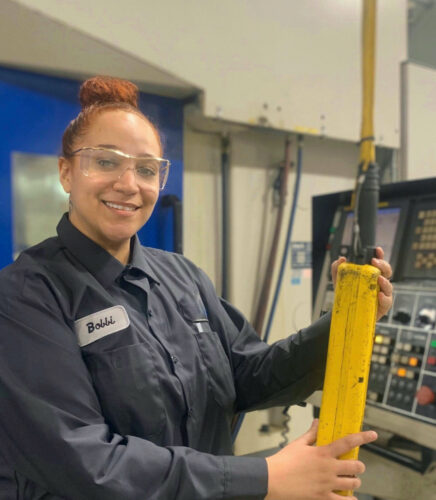 Bobbi Day started her career in customer service. Bobbi worked at McDonald’s in high school and after graduating, Bobbi worked as a waitress for five years. This was when a unique opportunity presented itself to her. “One day I came across a flyer about a Pre-Apprenticeship for CNC (Computer Numerical Control)/Industrial Mechanic Millwright.” The flyer was an inquiry for women interested in hands-on work, complete training, a support system, and free schooling!

Although Bobbi didn’t receive much information on the skilled trades in her arts-focused high school, she had always loved working with her hands. “As a kid, I used to do things like take apart radio’s and VCR’s and put them back together.” This love of hands-on activity was why she couldn’t pass up the opportunity!

Unfortunately, there weren’t many resources dedicated to the trades when Bobbi was in high school. However, she took a steel cutting class that allowed her to explore her creativity. Thankfully, now there are more resources available to students like Bobbi such as the Ontario Youth Apprenticeship Program that allows students the opportunity to try out the trade with no added costs. Bobbi’s apprenticeship started in 2014 when she was accepted into a pre-apprenticeship program through the Women’s Enterprise Skills Training of Windsor (WEST). After completing the optional pre-apprenticeship program, Bobbi started her apprenticeship in 2015 by applying to shops across
the city. Once hired, Bobbi attended classes at St. Clair College while working in the shop to complete the hours needed for the General Machinist course. After three years Bobbi graduated Bobbi’s greatest challenge was dealing with less open-minded coworkers, and showing them that she was just as dedicated as they were.

Bobbi encourages young students to be brave and to not let doubt get in the way of their hard work, “You too can be the diversity and change that we all need!” One doubt Bobbi faced was how well she would adjust to being back in school, but thankfully her pre-apprenticeship came in handy. “My doubts were just having to freshen some of the skills from high school, with math being number one but if you jump into it fresh out it’s a breeze. This is also what the pre-apprenticeship helps with so I was just fine.”

Bobbi’s favorite part of the skilled trades is how empowering it has been for her as a member of a marginalized group. But even more so the lifelong skill she has achieved, and the things she is able to contribute and create with the skill “It just kind of blows your mind.” Although there are no diversity initiatives at her company, Bobbi is excited to see the diversity grow in numbers at the shop. “My advice to companies looking to create a more inclusive workforce would be to hire more diversity throughout the corporate hierarchy. We want to be able to physically see the change, not just hear about it!