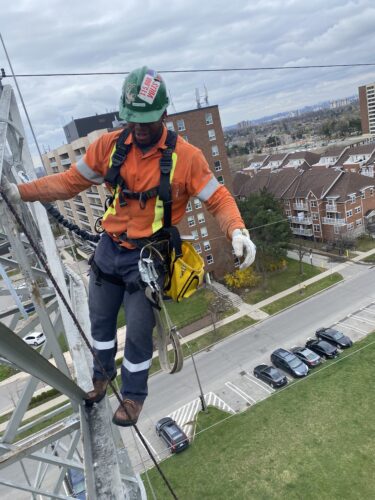 Dave Simon is a 3rd-year apprentice Powerline technician at Hydro One. Dave’s journey in the skilled trades started at Durham College, where he studied to be an electrical engineering technician. At Durham he learned the electric basics like theory, knowledge and understanding of electric motors, and wiring. Dave discovered a love for hands-on activity while in high school taking woodwork and auto class. Although he enjoyed the work, Dave was drawn to the more technical side of the trade and decided he would become an electrician. “I thought that was cool but electricity was way cooler to deal with.”

The greatest resource Dave found in high school was his workshop classes. Even though the skills didn’t directly translate to his chosen field, Dave found the experience to be very enlightening and encourages young students to do the same. “Those classes won’t necessarily teach you everything in the field but it gives you an idea of the process, if you like, working with your hands.”

After completing his course at Durham College, Dave joined the Canadian Union of Skilled Workers (CUSW). The CUSW encouraged Dave to consider a position as a powerline technician, after interviewing for both the powerline and technician positions, Dave got into both but chose the offer that came first. Now, Dave is in the third year of his apprenticeship with only 2,000 more hours and a red seal exam before he graduates as a Journeyperson Powerline technician.

Going into the field, David questioned if he would be cut out for it, “Am I going to be able to do it because this job was a little harder than most other trades. I find it just, especially because you’re working on it, you’re climbing towers, so now you’re like 200 feet up in the air, I mean you’re starting to shake but you start to think ‘wow, I’m really going to get used to this.”

Another doubt for Dave was navigating a predominantly white field. However, he let his hard work and skill speak for him, “My teachers would always come up to me during the middle of the class, and I’m pretty dedicated to working and they’re like ‘you’re a pretty good worker’ and that inspired me to continue to push down that path of just going into the trades”.

For Dave, being a minority in the field isn’t a setback but an opportunity to be a great representation. “It’s really good to be a part of something like that, but you want to see more people come in, of course, of your colour trying to do the same thing; making moves to get into the trades.” Dave has also found support with his team members, “You keep talking to people and you ask them questions and everyone is like yeah we’ve been there, people are usually supportive.”

Dave finds his joy in the day-to-day activity, every new day is a project he gets to work and solve with his team, “I enjoy the fact that I get to go into work, a bunch of guys are with me, we all get a task. We all complete the task together and then we get to look back at what we did… that’s my fuel.”

At Hydro One the grassroots diversity committee is in charge of pushing diversity and inclusion within the company, but Dave explains that the initiative is company-wide, he shares that in the heat of the Black Lives Matter movement he, and other black employees joined a conversation with top-level executives, and shared their experiences. Dave’s biggest advice to companies is to be more open to the diversity in the workforce and giving everyone an equal shot to prove themselves capable.