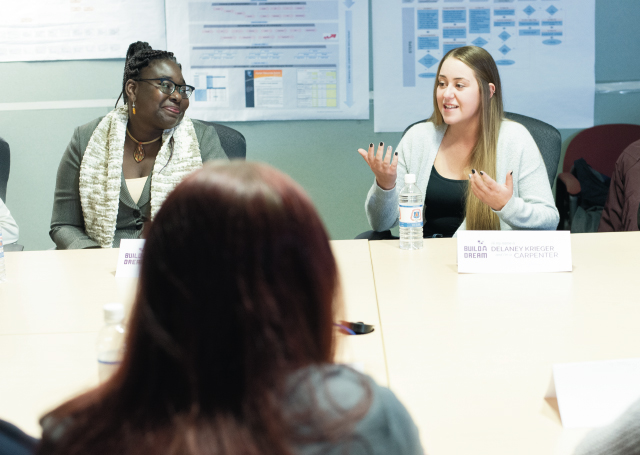 “You never know what you are going to get.” Delaney Krieger is a 2nd Year Carpenters Apprentice and she loves her job because every day is different.

What does an apprentice do?

Specifically, Delaney’s current role is a drywall, acoustics, & lather apprenticeship, one of 3 Red Seal programs available within the Carpenters Union. She’s based in Windsor, Ontario, with Carpenters Union Local 494 and is working on a condominium development.

Working with a partner, Delaney frames and lays out each floor. Specifically she:

What are the benefits of a career in a skilled trade?

“I love it so far. You get a bit of experience on everything,” Delaney says, adding that for her that can mean tasks like figuring out where the walls will go, cutting the pieces of track, and marking the studs.

She also likes that you get to see progress and are involved from start to finish.

What advice do you give to high school students?

Delaney has advice for students: “The first step is jumping in feet first.”

“Get your foot in the door and then figure it out and find your niche. That’s how I figured out what I wanted to do.” Delaney started as a General Carpentry Apprentice, but switched to a Drywall, Acoustics, and Lathing Apprentice (sometimes also referred to as an Interior Systems Mechanic)  as she learned what she enjoyed doing the most.

“You’ll never know until you try it,” adding that it’s okay to make the switch. “The biggest thing for someone considering the trades is that most of the skills are transferable.” For example, reading a tape measure…once you learn your measurements and fractions, even if you change trades, you can take that skill with you into things like plumbing or electrical.

What is involved in a Drywall and Acoustics apprenticeship?

According to the Canadian Red Seal standards, to finish a drywall acoustic mechanic & lather apprenticeship takes about 5,400 hours. The majority of the apprenticeship is completed through work experience and through two blocks of 8-week in-class sessions (basic and advanced).

Delaney explains that those hours are divided up and the usual path can take 3 years or more. Then apprentices can write their Certificate of Qualification (CofQ) which for Carpenters is a Red Seal certification (demonstrating excellence and offering labour mobility across Canada).

For the Carpenters Union, apprentices attend trade school twice, each course is offered in an 8-week block. Delaney paid $500 to hold her spot but after graduation, the union pays that back. For school she had to live in Hamilton for that time but she collected EI, the union paid $1,500 for room and board, and the government offered funds for travel; that meant she was making $600/week to go to school. “It was awesome!” Delaney spent her weekends hiking and exploring the area, “It was a cool opportunity to explore a new place.”

How much do carpenters make?

Delaney realized what financial freedom trades offered when her car broke down in her first year of training and she realized that she didn’t have to settle for buying a cheap car, but could buy anything she wanted. That new truck is her favourite right now!

She’s expecting to write her exam within a year-and-a-half and with her Red Seal her wage will go up to $33-40/hour! “That was the attractive feature to me.”

What to do after finishing an apprenticeship?

“Ideally I’d like to work as a journeyperson for a few years to get experience,” says Delaney. After that she’d like to work as a foreman or lead hand and run her own crew. Eventually she’d like to explore the management side of things and delegate work. Delaney knows that each step takes time and knowledge so right now she’s focused on learning everything that she can…and having a blast while she does it!