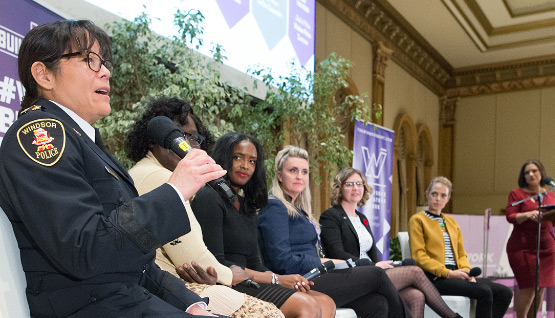 We’ve gone digital with a career discovery expo that you can attend from home! As with our live events, one of the highlights of the evening is the Dream Maker Panel where we invite women from a variety of backgrounds to share their career insight and experience with you.

Jennifer is a passionate supporter of Build A Dream. She was once in your shoes, trying to figure out what she wanted to be when she “grew up”.

Sarah Baldeo, Vice President, Privacy & Compliance Officer, ISB Global Services
Sarah oversees the Criminal Screening, Driver Risk and Digital Identity divisions as Vice President at ISB Global Services based in Milton, Ontario. Developing technology that leverages AI, machine learning and neural networks to create automation and new opportunities for growth has been at the core of Sarah’s career – and supporting women in STEM is her MISSION. Sarah has a Bachelor of Science Specialized Honours degree in Neuroscience from York University, several certifications, and is presently pursuing her EMBA at the Rotman School of Management.

Melissa Bishop, Olympic Athlete
Melissa is a two-time Olympian, national record breaker, winner of numerous medals, and Silver Medalist at the IAAF World Championship. She realized her love for racing at 12, when she discovered that she could outrun all of her male and female classmates. Melissa is the proud mother to toddler Corinne and has returned to Olympic training.

Riya Karumanchi, Founder, SmartCane
Riya is an entrepreneur focused on harnessing technology to better people’s lives and making a positive impact on the world. She was introduced to entrepreneurship at the age of 12 with her first venture, Smart Street Lights, and became the youngest member of Social Venture Zone at Ryerson. Her current venture, SmartCane, began as a science fair project and is a modernized orientation and mobility device for the visually impaired and deafblind community. Riya and her team have won several awards and she was offered an internship at MEDIC, a mHealth & eHealth Development & Innovation Center. The Economic Club of Canada’s Pitch Competition provided the opportunity to float a third venture, INUK, an online web platform to sell native Inuit crafts to people around the world. Riya’s team won the grand prize of $13,000!

Pamela Mizuno, Chief of Police, Windsor Police Services
Chief Mizuno began her policing career in 1994. During her tenure, she has moved up the ranks, serving her community with distinction and making important contributions to policing at every level. In October 2019, she was officially appointed as the Chief of Police, leading over 600 sworn and civilian members. Chief Mizuno is committed to enhancing the effectiveness of policing while developing long-term strategies to build a strong, vibrant and healthy community.

Master Seamen Michaela Alexander, Marine Technician, Royal Canadian Navy
Growing up near the ocean in rural Newfoundland I knew from a young age that I was interested in a nautical career. When the opportunity to join the Navy and earn a Marine Engineering diploma happened, I didn’t hesitate at all. Flash forward a few years, now I’ve been serving in the RCN for almost 9 years. I have sailed all over the world and learnt so much along the way. My day to day job changes often, it really depends on what the ship needs to be maintained; anything from marine diesel mechanics,  refrigeration technician work, basic millwright principals or operating heavy marine machinery. It’s an exciting career and I can’t wait to see what else it has in store!