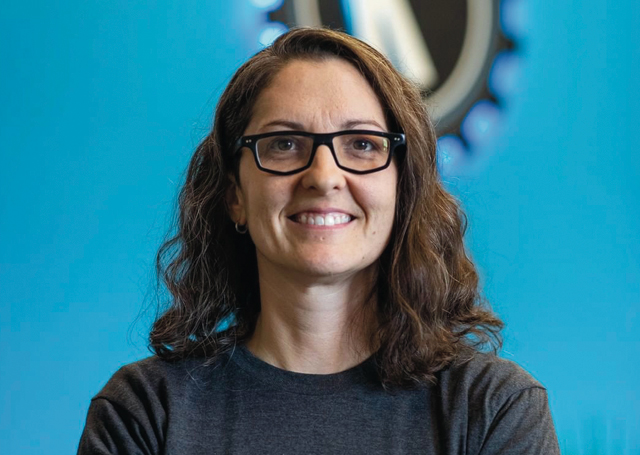 Erin Vaughan has a passion for business and supporting women.

She is an automotive service technician and the President & CEO of Kinetic Auto Service Ltd. She’s the President & CEO of EmpowHer Apparel that sells trades-related clothing with proceeds supporting women. She’s on the Board of Directors for her local Chamber of Commerce. She’s taught at the local college and is on the advisory board for the Office to Advance Women Apprentices.

Based in Regina, Saskatchewan, Erin didn’t always have an interest in cars. The skilled trades were not presented as an option for women in high school and she wasn’t a fan of rules or what was being taught in the classroom. It wasn’t until the age of 26 that she chose her path when her future wife suggested that it was time to pick a career.

With the Saskatchewan Polytechnic course book in hand, Erin flipped through and thought about what she wanted which included the opportunity to do something that could be done anywhere in the world. She was also aware that she was good problem solver and enjoyed working with her hands and that’s when she realized that automotive might be a good fit.

Erin went to the local auto shop and asked if they’d hire her but they only offered her a spot at the front counter. She applied for the 1-year program at the college and told the shop, “You’ll hire me later!” Two weeks after that encounter, the owner called and agreed to give her a chance.

With some experience and schooling in hand, Erin moved to a new shop but it closed down. That’s when she and another tech decided to open their own business.

“It’s a lot harder than it looks,” says Erin about becoming an entrepreneur. She found that her days were filled with more than working on cars…she was also answering calls, marketing the business, and dealing with customers. “I was doing everything but doing nothing well. It made no sense to me.”

Erin said that the secret to success was hiring strong staff and giving them the tools to succeed. That’s a piece of advice she’d share with every entrepreneur: “Hire people that are better than you and then put them in those roles!” As an incentive, she’s also given a percentage of the company to the staff.

What barriers are there as a woman in trades?

Erin says that she’s had men take the wrench out of her hand and when applying for a job she was offered $5 less per hour than a man who had less experience. Her determination pushed her forward: “I have a deep inside feeling that I can’t fail at things.”

Now as a business owner, she sees that drive in her latest hire. A young woman came and asked for a job and Erin suggested she get some education and experience first. The woman said, “You’ll hire me.” and started a school program. Every few months she called and Erin did not have a job available but the woman would say, “You’ll hire me on this date.” It was sounding familiar.

“Clearly she wanted to do this,” Erin says of her new apprentice. “She’s awesome. She’s a delight.”

What are we missing to get more women into trades?

Erin says that a lot of great work is happening but the talent pool is still so small. “We need to figure out a way to attract more women to the trades.” She says that includes connecting women to each other and to organizations that work together for advancement. She also thinks that tech classes should be marketed as a way to build future skills and self-reliance.

As an entrepreneur, she also feels it’s important to support other women and help change the ownership of more businesses. “We need to get women into all places and higher positions. If more women-owned businesses, they’d create those inclusive spaces.”

“We’re on the right track.”

What advice does Erin have for young women?

Erin says that there are so many options available for women today and “It’s kind of cool!”

“It’s a good job. We get paid well. It’s useful.” She says that it might be hard if all of your friends are doing other things and you might feel out of place as the only woman in a class, but consider convincing friends to try it out together.

Her advice to teens?

A true starter, Erin’s got big plans for promoting EmpowHER Apparel with an end goal of building grants and scholarships for women entering trades. She emphasizes the need for representation and highlighting everything the careers offer.

“If the visibility is there…if we can explain the benefits of non-traditional roles…I think we’ll have a lot more women interested.”

5 Scholarships over $4,000 Young Women Should Explore