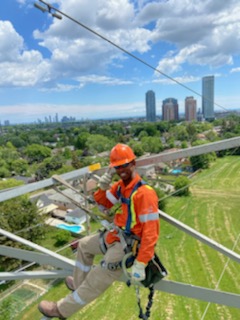 Sheldon’s journey in the skilled trades began at the young age of 12 when he worked alongside his father in the electric field. His work entailed doing the wiring for houses his father built. Eventually, Sheldon found his way to his current position as a powerline technician in Jamaica.

Being a Powerline technician was a childhood dream for Sheldon. At age 12, Sheldon saw a Powerline Technician fix the faulty wiring by getting on a ladder. After that, he was determined to pursue a career in the trades and worked hard to get there, “I always had my heart set on it… the joy I felt [when I saw him get very high], it grew with me.”

To make his dream a reality Sheldon worked hard by making use of the resources available in school. Taking woodshop and electrical classes in high school, and working on co-op opportunities that were available. Sheldon found his math, physics, and chemistry classes very helpful in preparing him for his dream career. “You have to be electrically inclined.” Sheldon also found a support system in his Electrical teacher and physics teacher.

Soon after graduating from high school, Sheldon went through a four-year apprenticeship, before sitting an exam. After the exam, he was interviewed by a panel, “My heart was racing.” Sheldon passed both the exam and the panel interview, and was taken into the field to test his ability,

Sheldon worked as a Powerline Technician for 14 years in Jamaica before he migrated to Canada. On arriving Sheldon challenged the red seal exam and passed, becoming a Red Seal Journeyperson Powerline technician. Sheldon’s first obstacle in the skilled trades was overcoming the physical requirements of the job. Another challenge Sheldon overcame was the harsh winters, but with advice from team members, Sheldon now works with ease in the winter.

Sheldon’s biggest challenge was navigating the job market as a first-generation immigrant. He was new to the system and struggled with finding an employer- a struggle that is common amongst immigrants. Luckily, he was introduced to the CUSW union and soon signed onto Hydro One as a powerline technician.

Sheldon’s biggest doubt came when he was preparing to migrate to Canada, he questioned if he would be able to build a life here doing what he loves. Thankfully, he didn’t let his doubts get in the way, “I always had a passion, i had to grab it.”

“The trades is my passion, my joy, my everything.” For Sheldon, there is a larger context to his love of the skilled trades. For one, the job of a powerline technician is crucial to keeping the lights on in important places, “I’m a deep thinker, the machines that keep people alive need to stay on.” Sheldon equally loves the daily challenge that the job offers him here in Canada, “I’m working on bigger voltages. It’s more exciting, the lines are a lot more interesting…I soar to new heights when I’m climbing.” Sheldon shares that at HydroOne there is a grassroots committee that deals with diversity concerns including gender and racial diversity. Sheldon offers sound advice for companies, they have to act, not just say. He believes that action is an important step to take in the process of unlearning biases, simply identifying the problem does not solve it. “Everything in life is an art.” Meaning, it all takes practice.