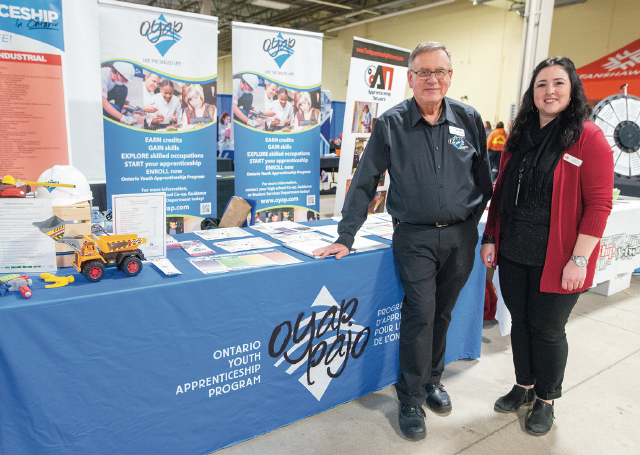 Mark Brotherston is an Ontario Youth Apprenticeship Program (OYAP) Coordinator for the Thames Valley District School Board. Mark shares his journey in the trades and how his career as an Automotive Service Technician helped him transition into his current position.

What steps did you take for your apprenticeship?

From a young age, Mark was drawn to cars and vehicles of all types. “I liked the type of work and subject… I got my first car at age 14.” Mark started buying and fixing old cars, eventually selling them to friends and family, “By the third car, I was selling privately.”

Inspired to continue on this path, Mark defied the insistence of teachers who attempted to dissuade him from the trades and encourage a more ‘traditional’ career pathway, “I couldn’t see waiting out another year.” Mark got a job working at a service station where he expanded on his skills and soon began his apprenticeship.

For Mark, the hardest part was convincing his employer to take him on as an apprentice at 16. After speaking with a journeyperson and through continuous efforts to show his hard work, Mark was able to convince his employer to register him: “I showed my passion and drive for things.”

Mark’s hard work and resilience paid off. He was able to receive the title of a journeyperson and after years of mentorship, he bought into the garage business as a partner and became a mentor to numerous apprentices in his 20 years there.

Mark didn’t just deal with apprentices. As his role in the business expanded so did his duties and soon he was interacting with many of the customers. This motivated him to communicate/explain automotive procedures and technical functions to everyone in plain language. He eventually authored a book to help motorists understand their mechanics: The Car Owner’s Companion (Random House, 1988).

What drew you to your current OYAP role?

During his book tour, Mark was able to interact with audiences and inspire more people about the trades. This showed him that he could make a difference. After moving to London, Ontario, Mark decided to take on a new type of career challenge: teaching.

Mark had more than two decades of experience in the field and was motivated to improve the knowledge of opportunities in the skilled trades available for high school students. He decided to go to teachers’ college and began teaching soon after. It was in this role Mark learned about the position of OYAP Coordinator, where he could directly assist students considering a career path in the skilled trades, the guidance he himself had lacked.

“I was lucky, I found myself in the trade… It shouldn’t have been luck. I had no guidance.”

What advice do you have for students considering skilled trades?

Why are you an ally for having women in trades?

Mark is an ally for women in the workforce and believes in the fairness of the hiring process, “I feel passionate about it. It would irk me to think someone was denied for their gender.”

Mark lives by his words, and personal experience has shown him that women in the trades work just as hard as their male counterparts. “I hired a female apprentice in 1996. Many traits of this apprentice were positive and enlightening.”

Where can skilled trades take you?

Mark has 26 years in the trade and business ownership, spent 11 years as an automotive shop teacher, has had repeated guest appearances on local TV and radio shows, spent 3 years as host of the open-line radio show, The Car Show on AM980, and was part-time Instructor at Western’s Althouse Faculty of Education. Despite what others suggested he do, Mark followed his passion, and that allowed him to not just do a job that he loved, but to share that passion with students and the community around him.