Automotive Service Technician Samridhi Sharma: ‘You can do this!’ 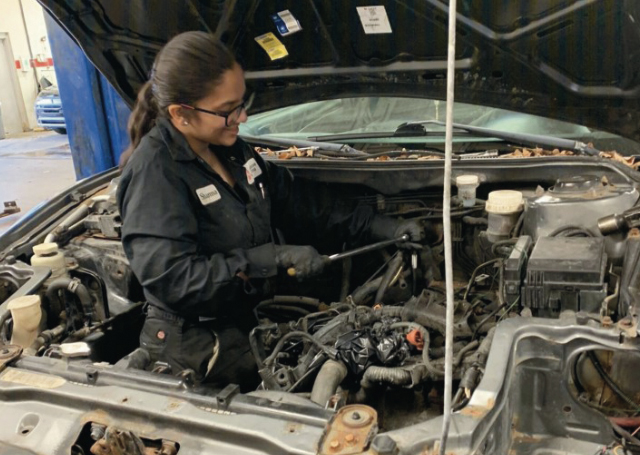 Samridhi Sharma always knew that she wanted to do something hands-on and wanted to have a unique career: “I didn’t want to blend in with the crowd.”

In her second semester of grade 12, Samridhi joined the accelerated Ontario Youth Apprenticeship Program (OYAP) as an Automotive Service Technician. She wanted to kickstart her career early and see what the trade was all about so it seemed like a good opportunity. Plus, with a co-op placement at a GM dealership and 2 months at Centennial College, she graduated with a diploma and Level 1 of her apprenticeship complete.

When she graduated from high school, Samridhi decided to spend 2 months in India and when she returned she started working at Mr Lube. She used that experience to move to Mitsubishi Motors where she completed Level 2 of her apprenticeship; when her boss left to take a job with Formula Honda he asked Samridhi to go with him! She began working as a Level Three tech but when the pandemic started, she was laid off.

Samridhi finished her Level 3 and is waiting to write her Certificate of Qualification (CofQ) exam to get her journeyperson 310S certification and Red Seal.

Is it hard to be a car mechanic?

“It was very challenging going into a male-dominated job. You have to know that it’s rare to see women in your job and the work can be heavy and dirty.”

Samridhi says that at first it was an intimidating environment but then she decided that if she spent time worrying about what people might be saying about her or what they thought then she wouldn’t get anywhere in her career. She told herself: “I need to focus on myself and be a good tech.”

“I overcame that. It’s all in your head! You have to convince yourself that you can do this!”

Samridhi said that she worked with great people who were willing to help her learn and she took advantage for soaking up everything they shared with her.

“Initially I was a 16-year-old girl who didn’t know anything about cars. I came in knowing nothing. When other techs saw I was so keen and pushing myself to learn, they reached out. They taught me what they knew. I learned a lot that way.”

What does a mechanic do in a day?

A day in the auto dealership could mean working on anything. Samridhi said a regular day means:

A day can also include talking to customers, talking to other techs (especially if you need help).

“My favorite part of the job is having a new challenge every day. You might have it easy one day then it could be challenging the next. Every day is something different and new people.”

How do auto technicians get paid?

At the Honda dealership Samridhi earned “flat rate” which means get paid by the job based on a predetermined amount of time, not by the actual hours you work. For example, an oil change would get you 1/3 of an hour on your cheque and a transmission diagnostic would qualify you for 1 hour; so whether you take more time or less time to do the job, you still get the same pay based on the rates.

“It’s motivation because you can make more. It motivated me to work harder.” Samridhi also said that there was a friendly competition where the person with the most hours on their paycheque got a bonus of $500; she earned the bonus twice in one year.

“If you are fast and efficient you just make more money.”

What happens when apprenticeship ends?

Samridhi originally wanted to start a Truck & Coach Technician apprenticeship but the accelerated program wasn’t offered at her school so she felt that starting with Automotive Service Technician was a good stepping stone and she found it “exciting and challenging!” But with her training complete and being laid off, she decided to take advantage of that time and enrolled in Centennial’s Truck & Coach Technician Program, In February, she got a job at Ryder and has to complete her probationary period before the company will sponsor her as an apprentice.

Why trucks? “North America runs on trucks. I wanted to make sure that I always had a job.”

Can a girl be a mechanic? Of course!

“When I started people would say why are you doing this? You’re a tiny little girl. Can you even lift tires?”

Samridhi said she had some initial hesitation but she was determined…and it’s all about mindset!

“It’s all up to you what you want to do. After a couple of months, I gained skills and confidence. You have to overcome that initial fear. You’ll learn as you go. You’ll get better. You’ll do fine.”

Samridhi credits her co-op teacher for introducing her to the OYAP program and connecting her to opportunities along the way. She also says that her parents were a big help with emotional support and encouragement. “My parents have always been proud of me and they help me.”

What advice does Samridhi have for other students?

“You can achieve it if you have a big picture, set a goal, and commit to it.”